I enjoy giving my body just the right amount of energy it needs to live at my ideal weight.  I am shifting from entitled to empowered.

Apprentice, this week we begin your coaching sessions on the Weight Skills:

Over the first few days, while exploring staying within your Calorie Budget for Weight Release and cutting down on refined foods, you may have some fears about going hungry with what you might be perceiving to be much less food (and perhaps different types of food) than you have been used to.

If you are “carb sensitive” as discussed in From Fat to Thin Thinking, you might even be experiencing sensations of what you consider feeling of hunger or deprivation. Generally, what you are experiencing is not true physical hunger or being deprived but healing:

Today’s coaching session: How Much Is Enough? (below) is designed to shift your thinking into a new perceptive of how much is “enough” and give you some ideas on ifilling up and feeling satisfied with less calories.

Not sure what your calorie budget should be?
Want to adjust your budget so you don’t feel deprived?  Weight Release Calculator

Today's Shift From Fat To Thin Thinking : I enjoy giving my body just the right amount of energy it needs to live at my ideal weight. I am shifting from entitled to empowered. 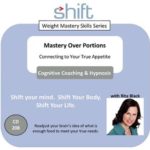 Special Sale - 50% off Mastery Over Portions Hypnosis
This hypnosis session engages your brain to readjust its idea of what is "enough" food to smaller portions that are more in line with your body's true energy needs.

Rita's Coaching: How Much Is Enough?

When my daughter was seven years old, we read the Laura Ingalls Wilder "Little House" series together at night.  If you are unfamiliar with the books or the TV spin off— the “Little House on the Prairie” series deals with a pioneer family who move west--told through the eyes of a little girl--Laura.

Throughout the entire series of books, Laura describes--often in great detail--some of the meals that they were eating in pioneer days.  Obviously, there were no Vons, Krogers, Safeways, or even Whole Foods in Indian Territory, and often the family made due with very little to eat.  Fear of starving to death on the vast plains happened on more than one occasion for this brave pioneering brood.

What amazes me is that Pa (the father of the group) is able to haul logs, split them, build a house, and plow the virgin prairie, build wells, and put out fires all with about 1200-1600 calories a day worth of food in his belly.

Little Portions on the Prairie

I remember growing up as an overweight teenager, and my mother telling me, as I heaped a third helping of mashed potatoes and gravy onto my plate, that I ate more as a lazy kid than the hard working ranch hands during cattle round-up season at her grandfather’s ranch in the Badlands of Montana.  As a former nutritionist, my mother knew calories inside out.  She had helped my great-grandmother dole out portions during lean times in the 40’s and she said that those hard working men ate somewhere between 1300-1800 calories during a grueling 15-hour work day—and they were fine, lean, healthy men—they weren’t dropping over dead from starvation.  “Uh, thanks mom.  I get the point.  What’s for dessert?”

In modern American culture, we have gotten so used to a lifestyle that embraces big portions that it is hard to believe that the human body can and does function on very little food..

The unconscious mind resists change.  Often this resistance feels like fear.  I often see the fear in my client’s eyes at the thought of eating fewer calories in order to lose weight.  I can sympathize--eating 500 calories less per day in order to release one pound of fat per week can seem downright intimidating to our primitive brain which is programmed to have us move less and eat as many dense calories as possible so that we can store fat in anticipation of the next famine.

So how can we Shift our perception of what is enough?

We can slowly begin to eat less dense calories and replace the bulk with lighter, more nutritious calories.  That is how we trick the reptilian brain into thinking we are eating as much but, at the same time, proving to ourselves that our body can actually operate on fewer calories.

Research shows that people who have Long Term Permanent Weight Loss typically eat about 7-11 serving of fruits and vegetables a day.  This may seem like a lot, but a serving could be a few slices of tomato on your sandwich.  A large salad would be about 4 servings of vegetables.  When you focus your Inner Coach on this strategy of eating more fruits and vegetables, the servings add up fast, add bulk, and allow you to feel satisfied with fewer calories and actually make you feel better and crave healthier foods.

I remember this was my revelation when I was making my own Shift.  My limiting belief was that no amount of food was enough--that my stomach was a voracious, empty void and that no amount of food would satisfy me.  So the thought of eating less was a bit frightening at first, but I was also determined to Shift my relationship—not only to food—but to myself.  I wanted to change my limiting belief that I needed a lot in order to be satisfied.

I started slowly adding more vegetables and salad to my plate and making my dense calorie food portions less.  I took the hunk of grilled chicken from 8 ounces down to 6.  I was frightened at first—making the portions smaller, but my Inner Coach said, “Hey if it’s not enough and you are hungry, you can always have more later.”  To my surprise I was not hungry—I actually felt fine…downright good in both my stomach and my soul.  Wow, I could really eat less and still feel satisfied.  This was a big Shift indeed.

To this day, I still enjoy eating a big meal once a day.  Making vegetables and fruits a large portion of that meal is my go-to strategy to feeling full and maintaining my weight.  Eating this way allows me to get full but not feel bloated and gross like eating in the past.  Instead, I feel light, connected to myself, and nourished.  Shifted!

Take on the Portion Challenge

Take a Shift Breath and say: I am shifting my body and mind to my true energy needs for weight release and maintenance.

I invite you to shift the feelings of what you might consider “hunger” (they are usually not hunger but your body re-regulating blood sugar and fat thinking perceptions of how much you “need”) as powerful feelings of healing your body and mind. This will shift your mind from panicked to empowered. 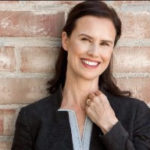 Be patient.  Be curious.  See yourself as a brave pioneer on your own journey to Long Term Permanent Weight Release.  Here’s to a life of feeling full of health!